A rocket launched from the northern Gaza Strip fell in an open area in Israel’s Sha’ar HaNegev Regional Council bordering the enclave and is the 19th rocket to be fired into Israel this year.

The rocket, which activated Code Red sirens in both Sha’ar HaNegev and Sdot Negev regional council caused no damage or injuries.

No groups have claimed responsibility for the rocket fire but Israel has repeatedly said that it holds Hamas, the ruling power in Gaza, responsible for each incident of aggression against Israel that originiates from the Strip.

There were no immediate reports of Palestinian injuries from the strike.

A 19 year-old border police officer who was critically wounded in a vehicular attack at the Halhul junction near the West Bank city of Hebron succumbed to his wounds Sunday night.

Sergeant Binyamin Jakubowicz, joined the Border Police a year ago, had been treated at Jerusalem’s Haddasah hospital suffering from „head and other injuries,“ said a statement released by the hospital.Jakubowicz is the 12th Israeli to be killed since the recent wave of violence began on October 1.

His attacker was shot and killed at the scene.

Jakubowicz’s funeral will take place on Monday at 6 p.m in the Kiryat Ata cemetary. He is is survived by his parents, brother and two sisters, who have decided to donate his organs. 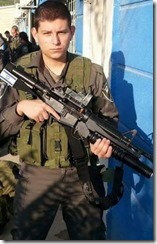 Earlier Sunday, an Israeli man was reported to be in a moderate to serious condition after being stabbed in his car by two attackers on Sunday afternoon when he stopped to make some purchases in the Arab village of Nabi Elias.

He managed to reach an Israeli military checkpoint where security forces administered treatment and called for an ambulance. The 48-year old man has been evacuated to hospital in a critical condition with stab wounds to his torso.

Security forces have launched a search for his attackers.

Hatzalah
„A female terrorist stabbed the security guard at the entrance to Beitar Ilit, October 8, 2015“

In an earlier incident, the guard at the entrance of the West Bank settlement of Beitar Ilit was lightly injured Sunday morning when he was stabbed by a female terrorist. The guard managed to shoot his attacker, who was evacuated to hospital in a serious condition after security forces checked that she was not wearing an explosive device.

Security footage from the scene shows the woman approaching the entrance gate to the town and starting a conversation with the guard after presenting her identification papers, before pulling a large knife from her bag and lunging at him.

The mayor of Beitar Ilit, Meir Rubinstein, announced Sunday that all Palestinian workers are to leave the town until further notice. Beitar Illit is an ultra-orthodox settlement with many Palestinians working in construction to keep up with the very high birth-rate.

Earlier in the morning, four pedestrians were injured in a car-ramming attack as they stood at a West Bank bus stop. Two of the victims are reportedly in a serious condition. The assailant, Soliman Shahin aged 22 and from Ramallah, was shot by a border police officer who was stationed at the junction.

Eyewitnesses and police reported that a group of youths was standing by the road when the driver accelerated into the crowd at the Tapuach junction, north of the city of Ramallah.

The Magen David Adom rescue service confirmed that the victims were all civilians.