Report: Hamas digging 10 kilometers of tunnels per month toward Israel

Analysis: Hamas under pressure as Israel makes progress on tunnels

Netanyahu: Claim we were unprepared for Gaza tunnels is ‚opposite of the truth‘

A senior diplomatic source said that Israel has no perfect solution to the tunnel problem, and neither does any other country. 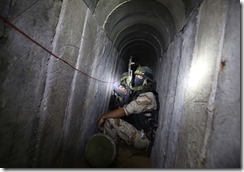 Palestinian militants from the Islamic Jihad’s armed wing, the Al-Quds Brigades, in a tunnel in the south of the Gaza Strip . (photo credit:MAHMUD HAMS / AFP)

Hamas is digging 10 kilometers (six miles) of tunnel each month toward Israel, a senior security official told Channel 2 on Wednesday. Construction continues despite several tunnel collapses in recent months.
A senior diplomatic source went on to say that Israel has no perfect solution to the tunnel problem, and neither does any other country.

Be the first to know – Join our Facebook page.

The news comes amid controversy regarding Prime Minister Benjamin Netanyahu’s readiness to combat the tunnel issue. Netanyahu pushed back on Monday against claims that his government was unprepared for the threat of cross-border tunnel raids from Gaza in the lead-up to the 2014 war, saying that they are “the opposite of the truth.”

The discovery in April of a tunnel leading from southern Gaza into Israel, and subsequent progress in detection in other areas, means Israel has obtained the precise ability to know where Hamas’s tunnels snake their way underground.
The tunnels are supposed to enable Hamas to insert its highly trained and heavily armed Nuhba Force members into Israel in a future war.
May saw the first cross-border mortar fire from Gaza since the 2014 cease-fire ending Operation Protective Edge. The Palestinian terror group was targeting IDF units engaged in hi-tech tunnel detection work between Israel and northern Gaza.

Since the end of Operation Protective Edge, Israel has invested more than NIS 600 million in tunnel detection technology.
Yaakov Lapin contributed to this report.